The Japanese New Year celebrations are called “shogatsu” and New Years  Day is called “gantan” .  In Japan the New Year is considered the most important holiday of the year.  Therefore the 1st is a National Holiday,  like in western countries the Japanese say Happy New whenever they see each other for the first time after the 1st of January. In Japanese this is “akemashite- omedetou- gozaimasu”.

Food plays a big part in their New Year celebrations . Japanese people eat special dishes called “osechi ryori” during shogatsu. It is presented in elaborate layered boxes and is very colourful and pretty. 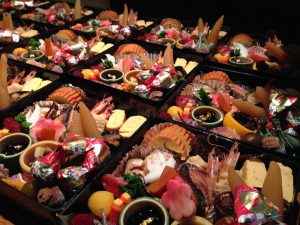 Each dish has a special meaning for example they eat prawns for long life, herring roe for fertility and many other foods. Its also tradition to eat mocha (rice cake) especially with soup.  Traditionally the Osechi is prepared by New Years Eve so that there is enough food to last a couple of days.  The idea being no cooking is required over New Year.  But nowadays many people buy ready-made osechi dishes from Department or Convenience Stores.  Because it is very time consuming to prepare so many different dishes and it can take several hours .

It is customary to give money to children during the New Year celebrations in Japan. This is called “otoshidama”.  The money is put into special envelopes and given to the children during family visits and get- togethers.

In addition to giving money it is also customary for Japanese people to visit a Shrine or Temple during the New Year holiday. People pray for safety, health, good fortune etc. The first visit of the year is called “hatsumoude” and is usually between the 31stDec -3rd of Jan . At this time the well known shrines and temples are very crowded and see upto a couple of million visitors during this time. 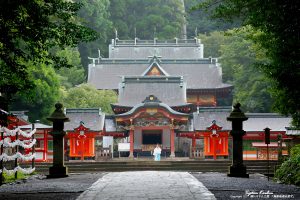 Most businesses in Japan are closed from Dec 29th – Jan 3rd or 4th.  It depends on the type of business and the day of the week.  However the convenience stores and some restaurants remain open throughout the holiday.  And some big Department stores start their Sale on the 1st of Jan.  So this is a great time to pick up a bargain!